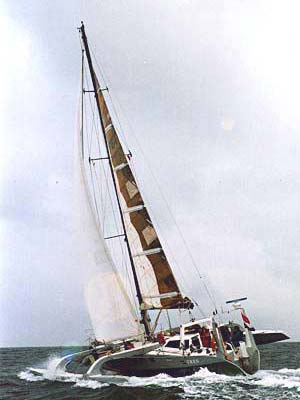 History of the conversion of "Côte Basque F-164"

E
specially built for Singlehanded Transatlantic Races, Côte Basque (skipper: Didier Munduteguy) competed in many, and won many second places, but never a first: a much lighter sistership always stole her honours. Côte Basque's sturdy construction and big floats were the main reason for Tres' present owner for his acquisition in 1988, to be the basis for his plans to have her rebuilt as a cruiser-racer. Côte Basque was sailed from Bayonne to Holland in the spring of 1988 and after two years of use in her original form she was put ashore and dismantled at the yard of Mono- and Multihull Boatbuilders at Drachten Holland in September 1989. Originally planned as a conversion, the project gradually increased to building a new boat.

The outer glass of the original underwaterbody and polyester skins were stripped off outside and inside and replaced by skins of E-glass, 3-D glass, rovings and Kevlar cloth, all packed in epoxy resin. All beams and stringers were beefed up with Carbon, Kevlar and epoxy, the bows were packed in Kevlar against collision damage. The after half of the underwaterbody was widened and flattened to have more load-bearing capacity, and was lengthened by 2,65 m. On top of this very strong, but sleek, underwaterbody a new hull was built, all using the same materials, even for bulkheads, floors, berths, bunks, tables, cupboards, etc., which are all structural parts of the hull. Bulkheads, decks and other large parts were manufactured under vacuüm, for a strong and light construction. The result was a very roomy interior, with a deckbeam of 4 m maximum instead of the 2 m beam of the original hull, integrated beams, a large deckhouse and everywhere ample standing headroom.

More than other seagoing vessels (as they all should be), multihulls are being eyed critically for reasons of safety. When designing and building Tres, the following was taken into consideration:

Originially, Côte Basque was designed with 300% floats. Which means that each float could carry 3 times the weight of the whole boat. Designed weight was 4 Tons. That means that each float (helped by the box-like beams) can easily hold the whole of Tres above water. On old Côte Basque you could sometimes sail the main hull through the wavetops. On heavier Tres, we have never managed to do that. Higher displacement sometimes has it's merits.

When all comes to the worst, it is of course preferable to take the ground in a 0.80 m draught boat than in a 2.10 m drawing monohull, even when on a lee-shore.
Of course, it is better to take the ground on purpose. Tres has a region in her bottom, the deepest part of her mainhull, which is reinforced against evils of the sands like stones, old bicycles, remains of wrecks or fishing nets etc.. The method of sandwich-building gives structurally very strong hulls, but they are not safe against these dangers.
That is why in the construction of the bottom of Tres two safety-measures were taken:

In the end it is much nicer to dry out on purpose and to take a walk on the drying sands. For that occasion, Tres has legs which can pivot out under the floats, so you can sleep in a horizontal berth after you have taken your walk.

Taking all into consideration, this trimaran is a much dryer sailor than a comparable monohull. Only occasionally you have to put on your oilskins, when you cannot cope your dogwatch from the deckhouse and have to handsteer in the cockpit, looking out for shipping etc.. That is when you get wet and when water can enter the boat. For those occasions, the deckhouse has floor and bunks fitted with self-drainage, while the cockpitfloor slopes to the stern to lose all water. Otherwise, waves do not have much effect on this boat: the maindeck is nicely rounded, the rest is merely netting and the foredeck, though protecting the crew, looses water easily.

Côte Basque had larger floats, with more displacement in the bows, than her contemporaries. This seemed to withstand all tendency to "bury the bows" which many multihulls had and still have. With her high and heavily flared bows, Tres tends to go into a surf when falling down a steep wave instead of trying to bury her bows. Apart from the bowpropellor and the heavy groundtackle, all other new and heavy gear and machinery (engine, further hydraulics, tanks, batteries, stowage) were placed in the after-end of the new boat: pitchpoling should not be one of your sailors-yarns.

Bows and sterns of mainhull and floats are heavily reinforced by Kevlar against impact. The floats, which are not designed to have any other function (stowage of sails etc.) can thus not be left open by mistake. They are divided in several watertight compartments, which can be pumped dry individually. All this does not help much when being run over by a container ship, but that applies to all other small vessels, so let's rest all that. A real problem for fast seagoing boats (not only multihulls, but for them too) are: flotsam, floating containers and (yes!) whales. Against these were taken the following measures: